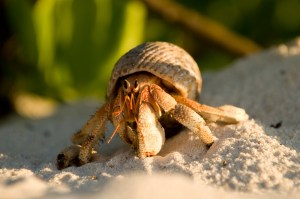 Whilst working on assessment and restoration projects on various Seychelles islands as part of a project funded by the GEF and World Bank, we at Nature Seychelles were struck by several questions that needed answering. We circulated these to various universities to see if we could get students to help in our work. One question that was picked up by our collaborators was whether indicator species of habitat quality could be identified. Land crabs were one potential group because they were found on all our islands.

Sarah Brooke from the University of East Anglia undertook this work on several islands. Land crabs play a vital role in the ecology of tropical islands. They forage in forest litter, recycle nutrients, oxygenate soil, and feed on seeds thus often preventing the spread of alien plants. The Wardens of Cousin Island Special Reserve call them the vacuum cleaners of the island. Land crabs are also found in several coastal habitats which make them useful in comparing habitat quality across islands

We managed to get Sarah to five islands. The islands were chosen because they had different levels of habitat degradation. Sarah examined the diversity of the land crab community as well as the total population of these species in three different habitats. Over a thousand land crabs of seven species were recorded during the study, including three species of ghost crabs and three species of hermit crabs.

The work, in press in the journal Acta Oecologica and available on line http://dx.doi.org/10.1016/j.actao.2009.07.001 shows that a species of ghost crab or loulou in Creole is more abundant in areas with native vegetation than in areas dominated by coconut trees. This is very evident on Cousin Island Special Reserve which has undergone tremendous restoration and conservation over a period of 40 years. Cousin Island was found to have higher species richness than the other islands confirming previous studies that this island is one of the best restored sites in the Western Indian Ocean.

It was also discovered that one species of hermit crab is highly dependant on intact native vegetation. This means that the presence of the species can be used to detect an undamaged habitat. Land crabs are therefore good indicators of habitat quality on tropical oceanic islands, with potential value in monitoring and restoration projects.

This work has shown that loss of native vegetation has negative impacts on the abundance of some species of land crabs. It also demonstrates that the success of restoration and conservation projects can be assessed using land crabs as an indicator.