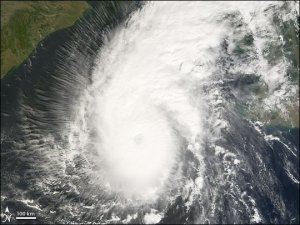 For someone living on a small tropical island it’s scary to think that tropical storms may be getting worse over the years. Indeed, more evidence is piling up that global warming is increasing the intensity and number of cyclones and hurricanes. In 2005, two papers created quite a stir in the scientific community. One by Kerry Emmanuel demonstrated that in the last 50 years there had been a substantial increase in the power of cyclones in the West Pacific and Atlantic and, the other by P.J Webster and colleagues, portrayed a substantial global increase of almost 100%) in the proportion of the most severe tropical cyclones from the period from 1975 to 2004. (http://www.nature.com/nature/journal/v436/n7051/full/nature03906.html. http://www.sciencemag.org/cgi/content/full/309/5742/1844)

Now a study published in the journal Marine Environmental Research shows that, incredibly, there has been a 5 fold increase in cyclones in the Arabian Sea since 1995. In fact the increase has been in what is described as “most intense cyclones”. The 1995-2007 periods has seen five times the number of these cyclones than in the previous 25 years from 1970 to 1995 http://www.citeulike.org/article/4970211

The paper entitled “Response of the Arabian Sea to global warming and associated regional climate shift” by Prasanna S. Kumar and colleagues states that it’s not just the number but also intensity of these cyclones which has increased. Cyclones with a wind speed greater than 100 km per hour are termed as ‘most intense cyclones’.

The authors say that “The response of the Arabian Sea to global warming is the major disturbance in the natural decadal cycle in the sea surface temperature (SST) after 1995, followed by a secular warming”.

The “signatures of this climate-shift are also perceptible over the adjacent landmass of India as progressively warmer winters, and decreased decadal monsoon rainfall.” The climatic changes have “possible impact on frequency and intensity of cyclones, summer monsoon rainfall, wheat production, land vegetation cover and frequency of heat spells.” Since more than 80 per cent of the rainfall over India occurs during summer monsoon, it is expected to have a major influence on the vegetation cover.

Increases in intensity and number of cyclones, hurricanes and other storm events do not bode well for the Indian Ocean region. It may mean that countries in our region which at present are not directly affected by cyclones will feel the full impact of these changes in the near future.

Cyclone experts say that in recent years the world has experienced an increase in economic damage and disturbance by tropical cyclones. Large loss of human life will continue in developing countries, they say. Projected sea level rises should also be of concern in the context of society’s vulnerability to cyclone-induced storm surges. This is because the main cause of death in the major cyclone disasters in history has been salt-water flooding associated with storm surges.

In a Statement on Tropical Cyclones and Climate Change authored by participants of the WMO International Workshop on Tropical Cyclones in 2006, it is stated that “Despite the diversity of research opinions on this issue it is agreed that if there has been a recent increase in tropical cyclone activity that is largely anthropogenic in origin, then humanity is faced with a substantial and unanticipated threat.” (http://www.wmo.int/pages/prog/arep/tmrp/documents/iwtc_statement.pdf)